How iPhone tech could be coming to a Chrysler near you soon…..

Arguably the defining feature of the Chrysler 200C’s interior is the absence of a single button on the centre stack. This has been made possible through the high-tech human interface (HMI) developed by supplier Nartron, the firm behind Apple’s iTouch/iPhone touchscreen systems and also acclaimed as an “American Top 50 Innovator” by Inc magazine.

John Washeleski, Senior Vice President, Engineering, picks up the story: “We demonstrated an iQ Power system to Chrysler engineering, which resulted in high interest, not only because of its elegant appearance but also its dramatic functionality and low cost.”

The 200C’s centre stack wasn’t the first automotive use of Nartron’s capacitive touchscreen technology.
That honor belongs to the Graphic Control Center (GCC) manufactured by Nartron for 1987 Buick’s. The iQ product is completely solid-state and has MPA (multi-point activation) capability, whereas the GCC had a membrane keypad and replaced some 90 different switches and gauges with its simplified system.

iQ Power applications in the 200C also include unique virtual touchpads for interior / exterior mechanical switch replacements. According to Chrysler interior design chief Klaus Busse, the 200C curved glass screen was a particular challenge for Nartron in the display of graphics. “After all, on an iPhone, it’s just flat.” Indeed, Washeleski says the specific configuration on the 200C is an industry first.

The good news for Chrysler customers keen to sample iPhone-style ‘scroll and flick’ gestures in their cars is that this technology is not only feasible but (according to Washeleski) is proven and production-ready for high volume. This elegant performance is available at a cost reduction. ‘Luxury for less.’

The technology has nothing to wear out and is highly reliable. People might expect their iPhones to last ten years, but Washeleski says the iQ Power solid-state system, switches, and displays, will easily outlive the vehicles they feature in.
Overall then, this technology looks like heralding a new era of cockpit design freedom, not only for Chrysler engineers but for the global vehicle industry. 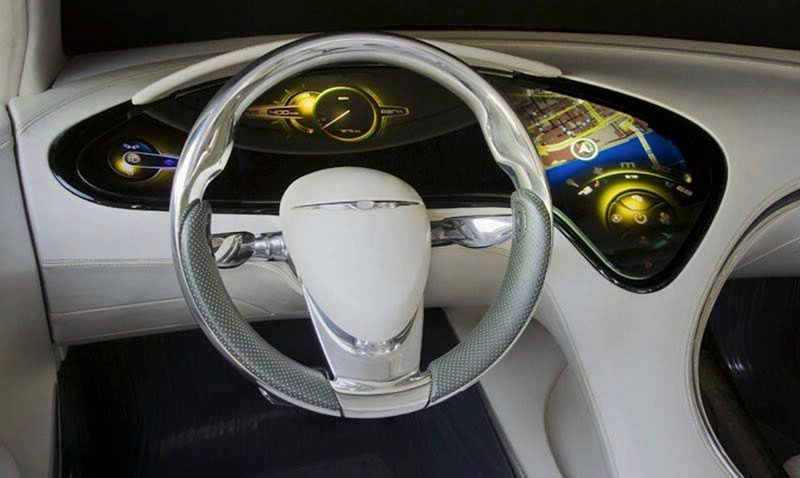