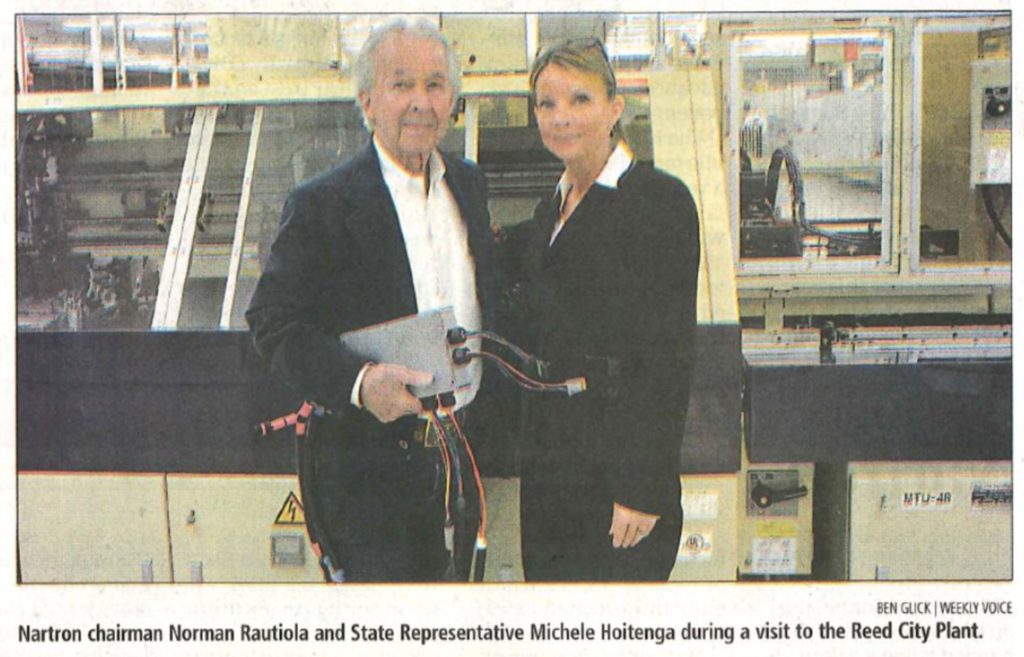 REED CITY – Executive vice president Demetris Agrotis took out a laptop and played a video of c\ vehicle equipped with the company’s Clear Vision cleaning system. In it, the vehicle sprayed heated fluid on its lee-coated windshield, and it was completely clear in a moment.
Clear Vision, Agrotis explained, was initially developed to clean frost and debris from windshields, but it will be used to keep optical systems on autonomous vehicles clean as well.
“I chuckle when I read the news that this automotive OEMs will put an autonomous vehicle in production in December 2020, 2021, or whatever,” Agroti said. “There will be no such thing unless we can guarantee the ability to see at all times and environments, and there will never be fully autonomous vehicles on all roads in northern Michigan unless there is Clear Vision.”
Watching the video was a member of the Michigan House of Representatives, Michele Hoitenga.
“The meetings I go to this is the stuff that we’re discussing right now,” Hoitinga said. “A lot of other states are going to be utilizing this technology, but if you can make this work in Northern Michigan where we know how bad the snow conditions can get, then you can make this work anywhere.”
As autonomous vehicles become more common on roads throughout the .S., some in the automotive industry have voiced that safety concerns have remained in the background.
Hoitenga met with executives to discuss the impact of autonomous vehicles and the need to ensure passenger safety. Hoitinga agreed with Agrotis that the advent of autonomous vehicles might require government regulation before the technology becomes widespread. There should be time wasted wailing for original equipment manufacturers (OEMs) such as Ford, GM, Chrysler, and other large automobile manufacturers to voluntarily adopt new safety technology, especially as autonomous vehicles are on the cusp of mass-market production.
“It takes a few visionaries in a few key positions in OEMs to do it,” Agroti said. “But sometimes they need someone pushing them, and the pushing comes from lobbyists or legislators or events – perhaps catastrophic events. So, which one are we going to wait for? We can all sit passively waiting for tho e things to happen, or we can look at public safety companies, as legislators, as media and bring the emphasis that all this is done to improve the safety for the users -which is us.”
Another piece of technology the executives, including CEO or man Rautiola, demonstrated for the representative was a technology the company developed that prevents objects in the way of a power window from being crushed.
Taking out the laptop again, Agrotis showed the representative a video of a pop can placed in the path of a conventional power window, which easily crumpled. Then he showed a video of Nartron’s anti-trap system. A pop can was again put in the path of the closing window, but when it made contact, it immediately stopped and reversed direction, leaving the can untouched.
“Unlike other anti-trap systems, products doesn’t require force,” Rautiola said. “It simply detects in space the presence of an object, so the powered window doesn’t close on the part of the body.”
Rautiola explained how the anti-trap system takes advantage of the same technology used in touchscreen phones to detect objects in its path.
Agrotis said there is no legislation currently demanding them, and automotive manufacturers may be reluctant to adopt the safety technology because there are no requirements.
Aided in efforts in the early 2000s with other companies and organizations to strengthen regulations to power windows and panels by requiring anti-trap safety systems to be put in all automobiles after several injuries and deaths.
A bill was introduced to Congress in December 2007, sponsored by then-New York Senator Hillary Clinton, and signed into law by President Bush in February 2008. Still, difficulty rolling out the regulations and protest from vehicle manufacturers prevented the bill from coming into full effect.
Rautiola said the cost at the time would have cost $2 per window or panel.
The people at the federal level didn’t think enough people were being injured or killed,” he explained.
Rautiola said more than 10,000 injuries continue to occur every year because of power windows and panels.
Agrotis presented it as an example of what can happen when a safety technology lacks sufficient public backing and faces sustained opposition. “We have a lot of safety technologies that apply today, but maybe they don’t excite OEMs because the legislation doesn’t require them. Legislation, if its focus is to improve the safety of passengers, could accelerate those technologies,” he said.
“As I sit on my committee and we are trying to educate the committee with all of this technology, and we have people who come in and tell us about it, it’s great. It’s interesting. It’s exciting, but safety is going to be a priority concern, and so the legislation is going to need to reflect that,” Hoitenga said. “The governor has made this a priority, too. We are very proud of our auto industry, so for us to be at the forefront of this technology makes sense.” Rautiola hopes that Hoitinga’s visit will help her inform her colleagues and car companies in her committee and let them know we have advanced technological capabilities and products to set up commercial partnerships and relationships to make tech for specific applications.
“She’s smart,” Rautiola said. “She’s already impressed legislators, and she understands autonomous technology systems that will be the future of Michigan industry. We’re lucky to be in her district.”