Smart Touch® sensing places the power the
microprocessor at your fingertips

Smart Touch® sensing is a breakthrough in human interface technology allowing direct access to computer power, such as with the highly successful iPhone™ and other handheld devices. By combining the reliability and flexibility of completely solid-state sensing along with anthrotronic considerations, capacitive sensing interface technology creates new automotive design opportunities.

Panels will not only act on touch but will have functions that respond to hand gestures and movements. For example, a center stack console can be enabled to illuminate when the user makes a movement near it, with the added benefit of conserving power. Interfacing to a vehicle by capacitive sensing creates entirely new opportunities in the evolution of automotive interior design. The styling design possibilities are nearly endless, providing freedoms that are unachievable with conventional switches.

This paper describes the design and operation of various systems that employ capacitive sensing technology.

Capacitive sensors have several noteworthy features not found in conventional switches, such as those in the automotive center stack console shown in Figure 1. The most apparent difference in capacitive sensors is that they do not require force for activation. By utilizing materials like indium oxides, conductive polymers, or other evolving nanomaterials, capacitive sensors can be fabricated as optically transparent films. This results in capacitive sensors that are clear and thin enough to be placed in front of visual displays without noticeably degrading the optical clarity of the viewing area.

Another key feature of capacitive sensors is that they can sense through relatively thick materials. Designers now have the option of integrating human interfaces into once unconventional locations such as the inside of trim panels, faceplates, moldings, and other such protective or ergonomic surfaces without disturbing the aesthetics of the finished product. Furthermore, capacitive sensors can form to complex contours and shapes, providing virtually unlimited functional sensing geometries.

Applying capacitive sensors to a substrate in multiple or matrix configurations such as that shown in Figure 2 creates a versatile touch surface for human interface.

Sensors activated by touch translate into coordinates that represent the points of human contact on the substrate surface. These contact points are processed by the control system into recognizable user input commands. 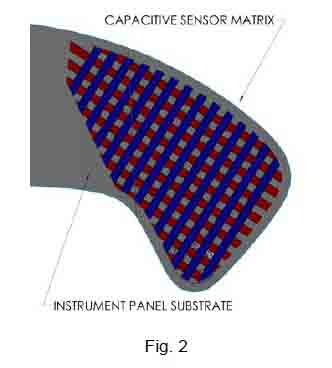 Making the substrate and capacitive sensors largely translucent permits direct backlighting of the sensing areas. Backlighting can assist to locate the touch sensors and provide visual feedback of sensor activation.

In a more innovative approach, rear-projection technology can project light directly through the sensors to render images onto the surface of a substrate. When a sensor is activated, the image projected toward its position then corresponds to the users input request. If desired, sensor activation feedback can then be communicated through alteration of the projected image.

Rear-projection offers the flexibility of displaying sharp images despite the complexity of a desired surface shape and contour. There are limitations in a rearprojection approach that must be taken into consideration by automotive interior designers:

1. Can enough light intensity be generated?

2. Heat build-up from the light source must be dissipated – This concern may be overcome by means such as air ventilation or the use of thermal electric devices.

As we move full speed into the information age, automakers are constantly challenged by the consumer to provide vehicle features that will enhance their personal commuting experience and keep them connected to the world outside. As new features make their way into vehicles, the requirement is to provide a more logical and intuitive approach to managing the complexity of each human interface component.

Visualize a vehicle interface system where display gages and indicators can be moved anywhere about the Instrument Panel (IP) or Center Stack Console (CSC).

Likewise, input sensors can also be positioned most anywhere about the IP or CSC. The IP and CSC can then effectively be customized and set for the personal preferences of more than one driver. Expand the vision further by integrating the IP and CSC into a single contoured translucent substrate that flows around the steering column and down the center console area.

Likewise, the substrate is fabricated with multiple independent capacitive sensors as well as large areas of capacitive matrix sensors. Figure 3 shows a vehicle interior for application of capacitive touch sensors. 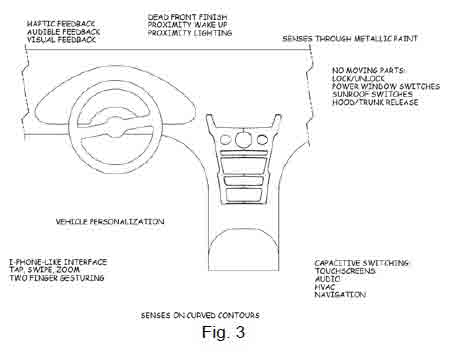 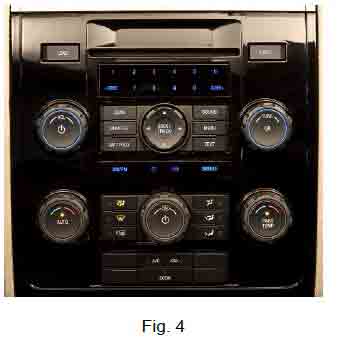 Touching any one of these icons would invoke a response from the system allowing the occupant to perform functions related to the icon. These functions could be as simple as turning the radio on or displaying vehicle status information. Or they could initiate more complex instructions like “retrieve and play voice messages”.

Regardless of the function, a vehicle display system of this type would require a standard set of display images and control icons capable of accessing and managing the vehicle functions. The user would be free to locate the graphical images within the projected regions of the substrate to create customized instrumentation layouts.

Images might further be tailored using commands that could resize, rotate, or adjust image properties for preferred viewing. For example, images representing oil pressure could be changed between analog readout, digital readout, or simple warning light. Frequently accessed indicators like speedometer, odometer, and fuel status could be fixed in position and remain illuminated, while less important display features like audio tone controls could remain hidden and accessible from within entertainment submenus. Navigation and Infotainment screens could be minimized and positioned out of main view, then maximized and relocated to a main viewing position when invoked.

In this vehicle system, dedicated function switches no longer exist. Instead, capacitive sensors are actively reassigned functions based on the images that project through them at time of switch activation. In addition, to switch reassignment, the control systems’ capacity to process capacitive sensor coordinates make possible the recognition commands through human gesture. By monitoring switch activation sequences, gesturing is used as a form of input command to further enhance the human touch interface.

While on a navigation screen, they could represent zoom in and zoom out commands to adjust the degree of screen detail. A “squiggle” gesture might be interpreted as a request to cancel an operation, for example, “turn off radio” or “turn off climate control” when performed over the primary command icon.

Configurable displays and capacitive sensors such as that presented here can reduce the visual clutter destined to plague many future vehicle cockpits. This degree of function integration takes human-computer interface to a new level and creates a more ergonomic and intuitive interface for the vehicle driver and passengers.

Automotive interior is an excellent application for capacitive sensors. Most interior surfaces of an automobile are made from non-conductive plastic, which is ideal for capacitive sensors. With an ever-increasing amount of creature comforts and entertainment features in demand and being integrated into vehicles, so increases the complexity of the interfaces needed to access and operate these features. Vehicle interior designers must be creative and open to new approaches on how occupants will access and interface to this growing list of vehicle features. Capacitive sensing offers a multitude of solutions to meet these needs. 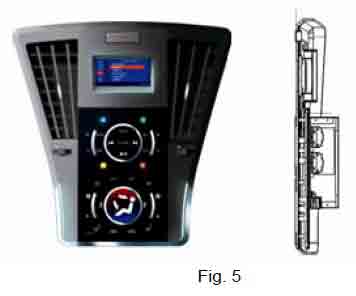