Since its fielding in the 1980s, the high mobility multipurpose wheel vehicle (HMMWV) has experienced high failure rates of its protective control box PCP. Significantly impacting the readiness and operations and sustainment costs. Located under the driver’s dashboard. The (PCB) houses the HMMWV’s starter glow plugs and accessory relays and plays an essential role in operations such as starting the vehicle. In early 1997 US Army Tank-Automotive Research, Development, and Engineering Center (TARDEC) took on the challenge of solving the PCB failure problems. This article describes the challenge of ensuring the development of a vehicle control unit (VCU). The VCU will replace the PCB and glow plug controllers (GPCs) currently found in HMMWVs.

Backed by its long-standing tradition of finding innovative solutions to complex problems. The TRDEC’s rapid prototyping team engineers believed that they could redesign the PCB to improve its functionality and performance. Their task was to develop the solution that would provide the solid solder in the field with increased readiness. All while simultaneously reducing the time spent on maintaining the HMMWV’s electro control systems.

Paramount to the TARDEC prototyping team efforts was that the PCB remained capable of handling unique scenarios associated with starting the vehicle, but not limited to. For instance, the PCB must not only be capable of reliability starting the HMMWV under normal operating temperatures. It must also maintain the same reliability during cold-weather starting. The PCB design was problematic due to the limited technology scenarios back then. In the early 1980s, the commercial marketplace did not have reliable and cost-effective solid-state electronic technologies to handle HMMWV requirements, such as starting in various environments.

With this in mind, TRDC’s engineers thoroughly researched the problems experienced with the PCB a identified the problematic issues that were causing its failure. The first problem was that the PCBs relays house within the box were burning out too quickly. The range of voltages the HMMWV encounters and the voltages (9 to 34 (V)) contribute to these burnouts. Originally relays designed within this PCB operated at 12 V. In many cases, however, 24 V was applied. The second problem was that the PCB contacts house within the box or welding shut. This failure was due to the high amounts of current sent through the contacts.

Rate at which the glow plugs were burning out.

However, the most critical problem the HMMWV was experiencing was the rate at which glow plugs were burning out. The HMMWV’s diesel engine needs call plugs to raise the fuel temperature and mixture when the engine is not enough to create combustion. Typically this problem occurs when the HMMWV’s operator repeatedly turns the ignition on and off to start the vehicle. These repeats can lead to what’s commonly referred to as stacking. Stacking is a term to describe the glow plugs when they become too hot (above 2,000°F). Stacking can occur when they are at full power for more than 10 seconds. Since the now obsolete electronic technology constrains the PCB design, the unit does not possess the capability to detect a stacking condition. As a result, the glow plugs tend to burn out. The glow plug temperature is primarily dependent upon the battery voltage and the amount of time voltage is applied to the plug. The glow plug is less dependent on the temperature of the engine block.

TARDEC’s goal was to develop an initiative and cost-effective replacement system. The replacement would be capable of handling every function the PCV performs and handle problems such as cold temperatures starting and stacking. To achieve this, TRDEC’s engineers look at the problem “outside the box” and leverage today’s state-of-the-art electronic technologies readily available in the commercial marketplace. Thus, they could develop a unique solution to a very complex problem.

During the last 10 to 15 years, advances in solid-state electronics technologies enabled TRDC’s engineering to re-engineer the PCB, improving reliability and performance ultimately. The TRDC redesign led to the development of VCU, a completely solid-state device that consists of transistors, diodes, and other electronic parts.

An 8-bit microcontroller is the heart and brain of the VCU. It is a highly integrated chip with a central processing unit, random access memory, erasable programmable read-only memory timers, and an interrupt controller. It also has several analog-to-digital converters to read battery voltage and temperature. Since this microcontroller provides a “one-chip solution,” TARDEC’s engineers drastically reduced the number of parts and design costs by incorporating the microcontroller in the VCU. 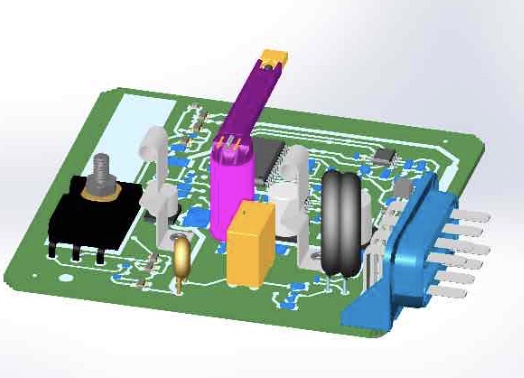 Several other innovative approaches incorporate to enhance the HMMWV’s electrical system operation. The PCB connects via a wire harness to another electronic device, the GPC. Previously, when something went wrong with the HMMWV Glow Plugs, the mechanic usually replaced the GPC when they replaced the faulty glow plugs. To help reduce maintenance costs and streamline the vehicle’s electronic components, TARDEC’s engineers Inc. the functions of the GPC into the VCU and eliminated the need for the GPC. In addition, the new design removes all PCB relays. Formally, a single PCV relay connected all eight glow plugs. A single PCV relay connected all eight glow plugs, so all eight plugs turned on when you turned on the vehicle. The VCU now separates the glow plugs into eight individual channels. This reduces switching noise and improving HMMWVPerformance.

The VCU is also equipped with individual transistors for each club plug, enabling the HMMWV to start its engine; even with several burned-out glow plugs, PCB configuration was previously impossible. In addition to the previously described technology and operation benefits, the VCU offers several enhancements. A sick white smoke that occurred during the initial start-up with the PCB is significantly reduced or illuminated. The improper heating of the glow plugs caused the smoke.

TARDEC’s engineers have also addressed how much work is needed to replace the unit on a vehicle? From electrical mechanical to solid-state technology, the vehicle sharply decreased both the size and weight of the unit. We concluded to use the exact dimensions and mounting for the PCB for a new unit. The only thing that soldier needs to do to replace the unit with relative ease is to drill one additional hole into the mounting area.

During the initial prototype development, we conducted a four-month in-vehicle fuel test of the VCU from February 1997 to June 1997. Ensuring the HMMWV equipped with the new VCU would be exposed to temperatures as low as 9°F or as high as 85°F. During the four-month test, we attempted to start HMMWV every business day. The HMMWV started every time. The HMMWV also started in a cold chamber with a temperature of -25°F.

Additional testing procedures involving 25,000 start sequences have been developed and are currently underway. To ensure the VCU is reliable under all circumstances and scenarios, the number of start sequences has increased to 2 1/2 times. This is over what the PCB went through to ensure that the new design meets rigorous demands.

Preliminary data indicate that this innovative solution solves the failures that have plagued the HMMWV. Both the field and offer a host of technology, operational and environmental improvements. We achieved this solution by focusing on the basic performance requirements of the PCB while playing today’s state-of-the-art commercial solid-state electronic technologies. TARDEC engineers believe this approach can readily be applied to other tactical wheeled vehicles in the fleet experiencing the same types of problems.

Michael K Cadieux is a co-op student working at TARDEC. He is working towards a B. S. degree in computer science at GMI Engineering and Management Institute.