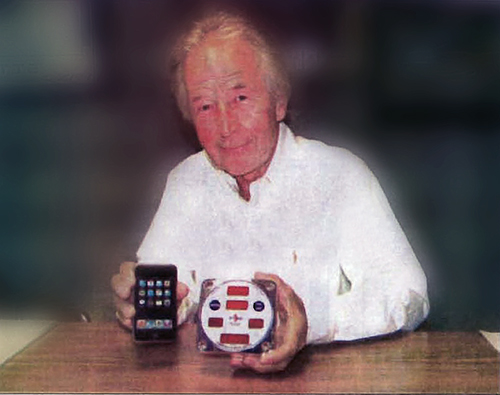 The Apple product on the left and the control panel on the right being held by CEO Norman Ralltiola have one thing In common: sensing technology pioneered years ago by Reed City’s Norman Rautiola.

REED CITY – When an iPhone user dials a number for pizza or when a firefighter operates the controls for a hydraulic generator on a fire truck, they have one thing in common: both are using sensing technology pioneered years ago by a Reed City Corporation. Devices that were the stuff of fiction 20 years ago are being mass-produced today, but some of ~helr elements were first imagined by engineers employed by Norman Rautiola.

“What we all dreamed about In the 1980s has come to pass. It’s being used widely,” Rautiola said.

Rautiola was the first to develop the touch screen Interface now in use in Apple’s iPhone and iPod.

The Reed City company focused on eliminating the barrier of buttons between a user and an electronic device. The goal of creating a symbiosis between the human brain and the computer led to research in developing a proximity field that could sense the location of a human hand or finger. The buttons on an iPhone operate by sensing where the operator’s finger is located, and the control panel for the fire truck’s generator works the same way.

“Your finger becomes part of the electronic circuit,” Rautiola said.

“The iPod user employs this patented technology to interact with its computer electronics,” Rautlola said.

Although he declined to discuss the current relationship between him and Apple in detail, Rautiola has said that patent negotiations between the two companies are underway.

“Apple has sold over 400 million iPods based on this fundamental technology that we have these basic patents for,” Rautiola said,
The touch screen technology has almost limitless applications, some of which are being pursued by Rautiola.

One example is using a proximity field in the Smart Close system that prevents children and animals from being trapped by the closing power window on a car. In February, President Bush signed legislation mandating standards for power window safety that the installation of our technology can meet. An electronic circuit senses an object in the way of the closing window and retracts it before a child’s arm, or a pet’s neck can be trapped.

The technology can be used for controlling a vehicle’s mechanical systems all well. Rautiola envisions a time when a driver will wave his hand over a dashboard to activate a car’s circuits – bringing the controls to life in service of their human master.

One of the advantages of using an electronic field as a switch is that it doesn’t have any mechanical parts that could wear out. Another advantage is that the switch’s surface, similar to the iPod, can be an unbroken, smooth surface impervious to water.

A firefighter can control a truck’s hydraulic generator using buttons impervious to water that can be triggered even though the operator is wearing heavy gloves. The Smart Power Systems subsidiary sells such a system.

“The man becomes directly interactive with the computer underneath; In an environment, the mechanical device could not withstand,” Rautlola said.